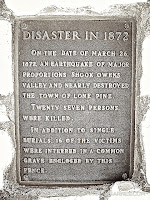 Over a hundred and forty years ago, the Great Lone Pine earthquake struck on March 26, 1872. Historical evidence detailing the damage it caused in settlements and landforms near the epicenter, and the geographic extent to which noticeable movement was felt, leads researchers to estimate a Richter magnitude of 7.6 to 8 or greater — similar in size to the 1906 San Francisco earthquake. Most buildings in Lone Pine were made from adobe brick and crumbled to the ground. Twenty-seven of the approximately 250-300 residents of Lone Pine were killed. Interred within a fenced enclosure are the bodies of 16 people who lost their lives that day.