Designed by architect Moshe Safdie, the Kauffman Center for the Performing Arts in Kansas City, Missouri, first opened its doors in the fall of 2011.

Due to the complex shadows this building casts, it is quite tricky to capture a pano of the interior and it became necessary to make a two separate visits. The first time was when I arrived for my midwest vacation last month, the second time when I was leaving. You could say the first photo session was a location scout because the second time I knew exact spots within the space where I wanted to take a picture.

Again, as with many of the buildings I’ve photographed during my trip, access to the main auditoriums  was restricted. That said, the Center is very accommodating to photographers. All you have to do is complete a “Request for Photography” form and schedule an appointment.

This blog post concludes my series of panoramic images that I took on my recent trip to the midwest. Thanks so much for stopping by!

Appending yesterday’s blog post is this panoramic image of the Bartlesville Community Center, a performing arts facility, located down the street from the Price Tower.

The Center was designed by William Wesley Peters, chief architect of Taliesin Associated Architects and son-in-law of Frank Lloyd Wright.

Just left of the American flag and west of the venue is a view of the Price Tower.

The Price Tower was originally intended to be built in Manhattan sometime in the 1920s but when the Great Depression struck, the project was shelved only to be adapted for the Oklahoma prairie in the 1950s.  It is the only extant skyscraper by Frank Lloyd Wright.

The building’s nickname “the tree that escaped the crowded forest” not only refers to the notion that it was plucked from the “crowded forest” of Manhattan skyscrapers and placed to stand alone on the wide open Oklahoma prairie but also to its design: the Price Tower is supported by a central “trunk” of four elevator shafts anchored in place by a deep central foundation, much like a tree is by its taproot. Nineteen cantilevered floors fan out from this central core, like the branches of a tree. The outer walls float off from the floors and are encased in patinated copper “leaves”.

Price Tower first opened in the mid-20th century as a multi-use building featuring business offices, shops, and apartments with oil tycoon Harold Price, its patron and primary tenant, keeping his corporate headquarters there. Today, the building operates as the Price Tower Arts Center, a civic art complex, focusing on art, architecture and design. Features include a museum, tours of the historic tower, a hotel and restaurant.

I arrived a half-hour before closing and would have missed an opportunity to view the interior of this building if it weren’t for Taylor Rasmussen, a fellow Wright enthusiast and photographer who also happens to be an employee at Price Tower. Seeing as I had come a fair piece distance to visit, Taylor graciously gave my sister and me a private tour.

Below: While most of the interior of the building is off-limits to cameras due to copyright restrictions, below is a click-through image to an indoor panorama of the upper loft of the Copper Bar located on the 15th floor that was shot with permission. It’s not my best pano as there are several stitching errors that I was unable to resolve. Normally I would just omit a pano like this from viewing except it’s the only one I’ve got and it shows the subtle triangular detailing of the red pigmented concrete floors.

For 12 years Scotty’s Classic Cars Museum in Arma, Kansas, educated and entertained visitors about the automobile history and its impact on society through the maintenance of exhibitions, publications, collections, records and a library.

Sadly the museum was shuttered in 2011 having sold most of the contents to the Central Texas Museum of Automotive History in Rosanky, Texas.

As of April 2012, eight remaining vehicles are for sale and can be glimpsed in the windows of this panorama.

I truly regret having missed an opportunity to photograph the interior when it was still open however below are some photos from tagged photos on Flickr.

While I was unable to actually explore the interior of the Colonial Fox Theatre during my recent visit, I was able to snap this pano of the parking lot where during the summer months the Colonial Fox Theatre Foundation presents “Friday Flix” a special series of outdoor screenings. It is a free event but donations are always appreciated and help with the organization’s efforts to restore the venue.

The Colonial first opened its doors on March 17, 1920 with over 2000 attending the premier. At least 1000 we’re turned away. Five hundred seats for the opening were sold for .50 cents with the remaining sold at .35 cents. 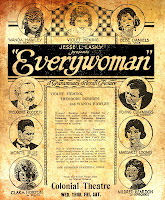 The first film in the new theatre was the 8-reel silent feature film “Everywoman” starring Violet Heming in search of “Love, deserted in turn by Modesty, Beauty, Wealth and Youth, but rescued by Truth and Devotion.”

The film was based on the stage play of the same name by Walter Browne and had been produced by the Paramount Artcraft Picture Corporation, the early parent company of today’s Paramount Studios.

In 1930 the Fox Kansas Theatre Company took over operations of the building and renamed the venue.
In 2007 the building was sold to the Colonial Fox Theatre Foundation with the mission to restore it. In 2008 it was accepted to the National Register of Historic Places.

The Ozarks were my destination while traveling along Route 66 in these past few blog posts. Specifically, what I wanted to see was Bonniebrook, the home of Rose O’Neill (1874-1944) an American illustrator, author, artist, poet, sculptor, inventor, suffragette, and creator of the world famous Kewpies.

Due to some heavy road construction en route to Bonniebrook, I arrived considerably later than planned. In fact, when I got there the place was about to close in 30 minutes but Susan Scott, the President of Bonniebrook Historical Society, graciously held the facility open for me and personally gave me a guided tour of the Kewpie Museum and the art gallery.

The museum houses antique Kewpie ephemera including anything you could brand with a Kewpie from dolls to door knockers. The gallery contains nearly sixty original works of art by O’Neill that are a radical departure from the commercial success of her Kewpie line. It’s fantastic! However, due to copyright restrictions no photos were allowed in this part of the facility.

Afterwards, Susan handed me off to Larry, the groundskeeper and tour guide for the Bonniebrook house.  Both Susan and Larry made my visit so delightful, and I can’t thank them enough for their hospitality!

Because of Susan and Larry’s thoroughness in sharing the life and works of America’s most beloved women artists, my takeaway is that Rose O’Neill was not only a gifted artist but also an archetypal “hippie chick” and a radical free thinker that was way ahead of her time.

Another thing I learned about O’Neill was that she studied sculpture under the tutelage of Auguste Rodin after being awarded the associate of the Société des Beaux-Arts and studying art in Paris in 1906.  The above panorama features a piece is entitled “Embrace of the Trees” that is based on the myth of Apollo and Daphne. It’s worth noting that this sculpture was considered vulgar and distasteful by people of her day.

More panoramas of Bonniebrook including the family cemetery where Rose O’Neill is interred can be seen by clicking through the images below. There’s also a wonderful radio piece about Rose O’Neill from Ozarks Public Radio on KSMU that you can listen to here.

I was still cruising along Route 66 the day I shot this pano on my way to check out the Hornet Spooklight when I came upon the Giant Praying Hands in Webb City, Missouri. Weighing in at about a 100-tons, these hands were cast in concrete by Jack Dawson, who at the time was a 20 year old college student, back in 1972. Due to the lighting conditions, I attempted to pull out the shadows by exposure bracketing (+1/0/-1 EV) the photos and processing them using HDR software. In this case I went with Photomatix because it has a “de-ghosting” feature which means that the moving car on the highway below and  American flag that was waving in the breeze would not render strangely in the final image.  Most of the time I’m not too crazy about HDR photos. The images that are produced using this technique seem too unnatural and sickeningly sweet to my eye but for what I was going for in this shot, I think it works well enough.