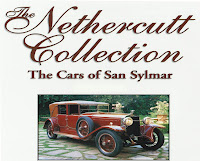 This blog post marks a return to the Nethercutt Collection in Sylmar, California.  The collection features rare collectibles ranging from mechanical musical instruments and antique furniture to the true heart of the collection: over 250 American and European automobiles dating from 1898 to 1997.  To view a panorama from my previous visit to the Nethercutt and the interior of a 1937 Pierce Arrow trailer, click here.

The wonderful thing about the Nethercutt is that photography is permitted however on some days tripods and monopods are OK while on other days it is not. I think it depends on the security team but it’s worth calling ahead before visiting.

This panorama was particulary difficult to capture with tricky lighting and reflections everywhere. Marble columns, crystal chandeliers, painted ceilings all make up this beautiful Grand Salon Showroom of the 1910’s, 20s and 30s. On display are approximately 30 of the finest automoblies of that era. Duesenbergs, Cadillacs, Isotta-Fraschini, Delahaye, Minvera, Renault, Maybach, many other European and American built automobiles.

Earlier today artist and animator Armen Mirzaian was laid to rest at Forest Lawn in Hollywood Hills. He had been killed in a car accident only a week before. Armen was once a co-worker of mine on a project I did a few years ago. While I didn’t know Armen very well outside of the office, his comical drawings and kindhearted humor always made my day.

The number of people that came to pay their respects today was astonishing and the church was overflowing. So much so that many mourners had to listen to the services from outside as there was no more places to sit within.

Outside there were other co-workers including everybody in this video (except of course, Armen) and I was reminded of the day I shot this clip: it was Halloween. April — the young woman with the black hair in this video — had thought it would be fun to prank Armen and dress up like him. So I set up a hidden camera to capture the moment of surprise when Armen saw her.

But unbeknownst to us, Armen and two other co-workers thought it would be fun to dress up like April and so the trio showed up at her cubicle impersonating her.

As you can see from this clip, both Armen and April were utterly pwned and it was awesome! (Armen is the one standing on the far left.)

When I spoke to the others that were in this video following the memorial service, I recalled to them this story. I believe Armen would have enjoyed this as a legacy moment to remember him by. It suits him. It’s funny, ridiculous, side-splitting laughable and fun. At least, it’s how I’ll always remember him because it’s tougher to realize that he’s no longer with us.

My condolences to Armen’s family and friends who knew him well.