1937 Pierce Arrow Trailer Interior at The Nethercutt Museum in Sylmar

In memory of my father and grandfather, for Father’s Day this weekend I visited the Nethercutt Museum in Sylmar, California, to have a look at some of the world’s greatest antique, vintage, classic and special interest automobiles on display. 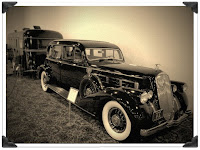 Growing up dear old dad drove a black convertible 1955 Cadillac El Dorado which was his daily driver. Occasionally on the weekends he’d take out the blue hard top 1955 Coupe de Ville for a spin. In the late eighties, he traded them both in for a gold convertible 1971 Cadillac Ed Dorado which he also commuted with daily.

But there were more than Cadillacs in our two car garage. We also owned a red 1945 Packard that my dad would cruise Van Nuys Boulevard on Wednesday nights with the family.  And then there was our beloved blue 1955 Chevy Bel Air which was my mom’s daily driver that she drove well into the nineties.

Touring the Nethercutt by myself made me nostalgic. I didn’t have my grandfather around to talk stories about the past and I didn’t have my dad to share the history of each vehicle. I miss them both.

On my own I explored the fully restored 1937 Pierce Arrow trailer and tow car simply because I could step inside and capture this 360° image.

What’s great about visiting the Nethercutt is that it is completely free. Be advised that the Museum is a self-guided tour that is available on a walk-in basis however next door, the Collection (which in addition to classic cars features rare collectibles ranging from mechanical musical instruments and antique furniture) is only available to view by guided tour so make a reservation in advance.