Yesterday artist Leonard Knight quietly passed away. Knight was unlike anyone else I’ve ever met. He was pure love embodied. It’s visions like his and his firm belief in a loving God that give me a sense of comfort when I contemplate my own mortality. 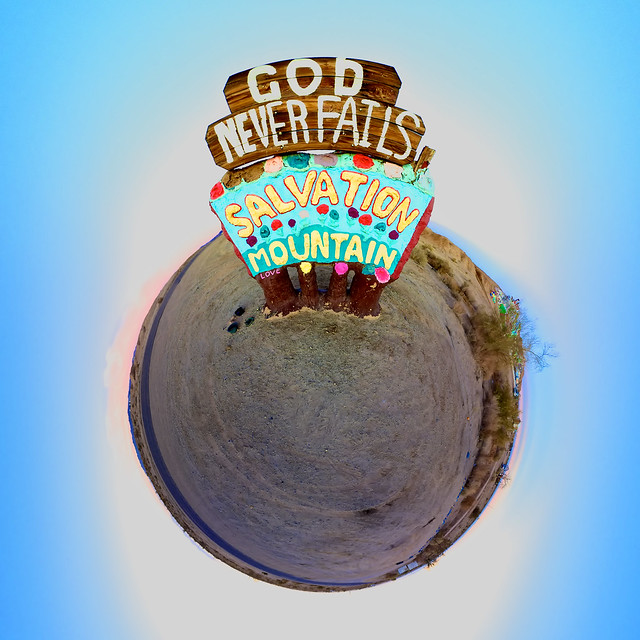 The series of images above are from his life’s work “Salvation Mountain” located the Salton Sea of California.” Read more about them in this blog post.

While we’ve lost a great artist here on earth, heaven’s claimed one of their own. God speed, Leonard!

Artist Damon Martin’s piece entitled “Every Piece of Ivory Comes from a Dead Elephant” is part of a multi-national campaign funded by the International Fund for Animal Welfare (IFAW) to spread awareness of the plight of elephants. Completed in 2012, it is located at the intersection of Rose and 3rd Street in DTLA (approximate address is 700 E 3rd St., Los Angeles, CA 90013).

Of his work, the artist stated, “These elephants are still in crisis. Their population is in crisis. Poaching is rampant. I am trying to bring awareness to the fact that the United States is still the number two consumer of ivory in the world. These elephants, for me, will represent a commitment towards community, family, loyalty, and also the lack of awareness of elephants themselves and how they relate to each other.’

“In recent history we have come to learn how they’re actually communicating, which I find shocking; that we went to the moon in the 60′s and we’re just now discovering how elephants are communicating. Up to a couple of miles away, they can communicate through a very low frequency; humans can’t hear it. It’s pretty shocking that we know so little about another species.’

“I know that the poachers are getting about $500 for a pair of tusks. They’re destroying this amazing, incredible, and highly intelligent animal for $500 for just maybe 3% of its overall mass. It’s not only destroying the animal. It’s destroying the community and who we are as a species.”

The “Spirit Tree,” was one of the many trees in Joplin, Missouri destroyed by a deadly tornado that struck on May 22, 2011. This 40′ tree on 20th Street near the Kansas City Southern Railway tracks was painted with vibrant colors inspired by Native American spirit stick art. It was done by Dolores and Darrel Bilke and members of the Tank, a public art group that has worked on other public murals in the city.

The young woman beneath the tree is my niece, a student and an artist, whose most recent work was featured at the SEK Art Fest 2013 and sponsored by the Joplin Globe.

Last year, I originally posted this image as a 360° panorama. In today’s blog post I’ve taken the same image and manipulated it into what’s known as a “little planet” or “stereographic” projection wherein a equirectangular image (such as my panoramas) is wrapped around itself using the “polar coordinates” filter in Photoshop to create a circular image that seems to wrap the panorama around a planet. Hence the name “little planet”.

You can also achieve the same effect with Gimp if you’re inclined to open source image editing.