I’m taking off for the Memorial Day weekend, leaving behind my house-sitting stint and the world’s sweetest kitty so I’ve put together a map of a walking tour (see above) of the street art murals in the Thai Town area that I’ve been blogging about these past few days. 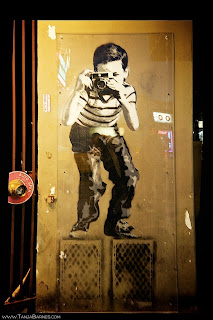 Click on the map pin to view an image to help you identify the piece. You can even click on the image in the popup to view more information or even perhaps an interactive panorama.

There’s way more to see in the area. But if you head west towards Hollywood and Highland, you’ll find this piece from Banksy Mr. Brainwash (left).

If you know of a location, please help me stick a pin in this collaborative map.  Note: I reserve the right to edit the map pins if the locations don’t relate to street and graffiti art.

It won’t take you more than 30 minutes to see them all but you may want to grab a cup of coffee or smoothie at the nearby Casablanca Coffee Lounge in which case add some more time to your tour.

Have a great weekend!

Click through below for 360 interactive images:
“Kannon / Kuan Yin” can be found at the intersection of Hollywood and Western across the street from the Metro station

Success happens overnight for some people but for graffiti artist turned gallery artist, RETNA’s breakout success is a long time in the making. Last week, RETNA unveiled a unique work of art on the tail of one of VistaJet’s Global Express XRS aircraft during EBACE 2011 in Geneva. This week RETNA was featured in the new documentary “OUTSIDE IN: The Story of Art in the Streets” that premiered yesterday at the Egyptian Theatre in Hollywood.

However, RETNA’s been collaborating with fellow street artist Miles “Mac” MacGregor for several years now and many of the murals they’ve produced together have become local landmarks, two of which happen to be within very close proximity to the place where I’m house-sitting.

Featured here “Kannon / Kuan Yin” (above) and “La Reina de Thai Town” (below) were created in 2007 and 2010 respectively. I’ll be posting a map of the street art of Thai Town along with some additional fantastic murals soon.

I’m house-sitting in Thai Town, an area on Hollywood Boulevard roughly between Wilton and Normandie just off the 101 freeway.  In addition to featuring some of the best Thai restaurants in Hollywood, the hood  also plays host to a dream team lineup of some of the city’s finest street artists including the LA Mural Front, Miles “Mac” MacGregor, RETNA and most recently the street team of Desire Obtain Cherish. 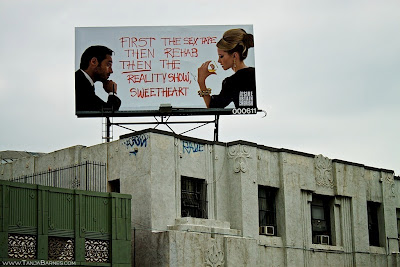 When not overtaking the billboard of a Stella Artois ad over Torung Restaurant (right, May 2011), Desire Obtain Cherish have also blessed the alley way near Mel Pierce Camera with a fleeting ephemeral vision they call “Venus” that I captured in 360° (above). 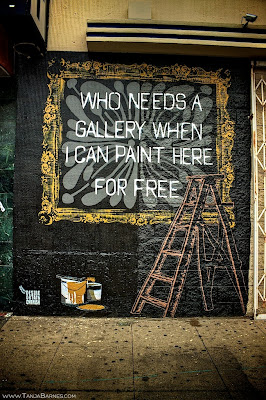 Join me over the next few days as I’ll be sharing with you some more works in this fascinating neighborhood street gallery.

The Central Rotunda at Griffith Observatory in Los Angeles has the distinction of being one of the top 10 ceilings in the world. It was designed by muralist and Hollywood art director Hugo Ballin who also worked as a sketch artist on MGM’s 1939 classic “The Wizard of Oz”.

Be sure to click on the image above to see all the gorgeous details that are featured in this mural including the celestial heavenly bodies of classic Greek mythological heroes such as Atlas, Mercury, Venus, the four winds, the planets as gods, and the twelve constellations of the zodiac. The line that you see coming out of the hole at the apex is the wire from which Foucault’s Pendulum is suspended.

I had an opportunity to capture this image of the rotunda on a recent hike to the observatory with the awesome Downtown Greather Los Angeles Hiking group from Meetup.com.  This is a really great group of fun, gregarious people. Bob, the leader of the group, describes it as “We’re not a “hard core” hiking group. We believe that having fun and socializing while hiking is just as important as getting some good exercise, so don’t expect any sprints to the destination or death marches here. And dogs are always welcome (except in prohibited areas) on our hikes.”

Leonard Knight, 79, has been building “Salvation Mountain” an on-going art installation near Slab City in the Salton Sea, California, for the past 27 years. Its sole purpose is to convey the simple message “God is love.”

Because of Knight’s dedication, it seemed fitting to see Salvation Mountain on Easter.  So last Sunday along with my sister we set out for a visit, and while we were there, we had an opportunity to meet the artist.  Knight is a sweet, kind soul as evidenced in the video clip below. He has only recently returned to the mountain after being hospitalized for heart complications about six weeks ago. Despite his weakened condition, the artist remains cheerful and vibrant sharing his message and giving gifts of postcards, stickers and a DVD featuring a documentary about his work to all who come to visit.

The mountain was fabricated from an adobe mixture that Knight mixes himself using dirt from the desert floor and straw.  The structure is then lovingly lavished with color using thousands of gallons of paint.

(Above) Artist Leonard Knight was featured in the in the 2009 film Into The Wild directed by Sean Penn who happened to be visiting the same day I was accompanied by his gal pal Scarlett Johansson.

Whether it’s Easter Sunday or not, anytime is a great time to visit Salvation Mountain but more so now while Knight is still alive and kickin’.  According to his friend Kevin Eubanks, due to his health Knight will no longer be sleeping in his truck near the mountain at night but instead staying at a house nearby in Niland with visits to the site during the day.  You can keep up with the latest developments at Salvation Mountain’s Facebook page.