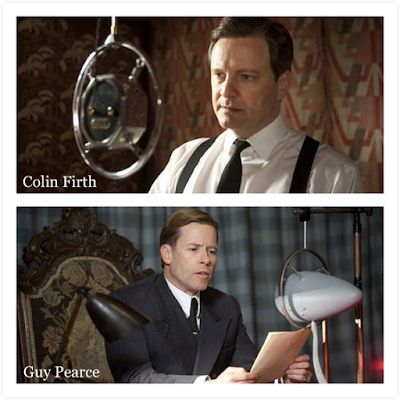 Back in 1983 I met actor Colin Firth backstage in London following a performance of “Another Country”. A year later he made his film debut in the screen adaptation of that play.

Flash forward to this past weekend where I once again had an opportunity to meet Firth backstage at a screening of the much acclaimed motion picture “The King’s Speech” in which he plays the part of King George VI. The role garnered Firth both an Academy Award nomination as well as a Golden Globe one for “Best Actor”. But it also received a nod for this year’s SAG Awards and earned an ensemble nomination for “Outstanding Performance by a Cast in a Motion Picture”.

I asked Firth and co-star Guy Pearce one question: How did they get their SAG cards?

Of course, as anybody who knows me knows, I recorded the conversation on my iPhone but in this instance the sound quality is so wretched and so unlistenable that I decided it was better to transcribe it.  I hope you enjoy their responses as much as I did in getting them.  🙂

Me: “This question is to both Mr. Firth and Mr. Pearce. Both of you: How did you get your SAG card?”

“I have to say it was one of my finest moments. Getting my SAG card was probably more meaningful to me than any nomination I’ve ever had. It made me feel more like a film actor or a movie star. I still have my first SAG card. I think it should be framed in the bathroom!’

“Um…I got it… well… you’re challenging a person whose memory is going!  Um… I got it… let’s see… I did a film in this country and I couldn’t do it unless I was a member of SAG and I went through all the right channels and the right motions. I had to apply for it and get all the approvals and everything before I could do the film. I think it was in the early nineties. But I had to become a member of SAG in order to work here on that film. So I’m afraid I can’t be more specific than that but it was all legitimate.”

Me: “Guy, do you remember your first SAG role?”

Guy Pearce: “Well, “LA Confidential” … which you may have heard of!   Uh, same process also although it was a bit difficult because Russell [Crowe] had already got his SAG card because he had done a few films before.’

“But I think it was a difficult process for Curtis Hanson to try and prove that I really was the person they needed to cast in this role. We were the first two people that were cast in that film and not only was there pressure from Warner Bros and producer Arnan Milchan to cast Americans in the film but I think there was some difficulty in proving I was the right person for the role as well (laughs). But we managed to succeed obviously.”

Actually, I was surprised to hear that Pearce did not require a SAG membership for his performance in “Priscilla, Queen of the Desert” even though the film won an Oscar and various other award nominations. I’m guessing that either it wasn’t a union show or Global Rule One did not apply in the case of this film as it was an Australian production.

While I thought the “The King’s Speech” to be well worth watching the only thing that was difficult for me to believe was the casting between Pearce and Firth. Pearce plays the older brother and heir apparent to Firth’s little brother and second in line to the British monarchy.  Despite the fact the they both are really quite good in their roles, when you put the two together in a scene it’s unconvincing and doesn’t play out quite right. Pearce appears much younger than Firth. The fact is Pearce is indeed seven years younger and it shows on the screen. That said, I was unable to find a still that features both of them so I had so create the image you see posted above as an indicator that the two were even in the same movie.

Perhaps Pearce wasn’t the first choice to play King Edward VIII because he made mention during the interview that he was cast much later in the production well after all the roles had been cast and principal filming was about to begin.

“The King’s Speech” is paint-by-numbers, award attracting bait but nevertheless it is a good film. The best ensemble cast nomination from SAG is rounded out by top performances from Helena Bonham Carter and Geoffrey Rush.